First the disclaimer: There are probably a thousand ways to do an engine swap. I do not claim that the way I'm doing mine is the right or best way. It's just the way I have chosen to do the swap. I do not guarantee that any of these processes will work for you. Proceed at your own risk.

I have decided to transplant the engine from a donor car and all of it's wiring and systems. So EVERYTHING from a Solara was transplanted into my Corolla if possible. Everything else was fabricated, if it could not be purchased. 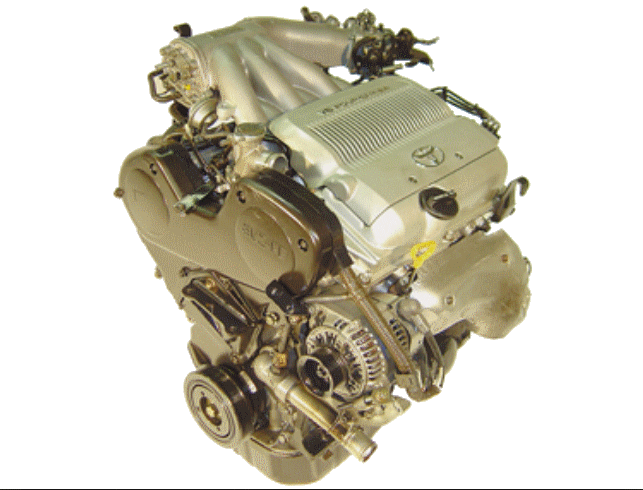 When it comes to V6 engine swaps there aren't many easy choices. When I did mine there were essentially three choices: 3vzfe, 1mzfe and the 3mzfe. Here are some comments on each.

The 3vzfe was Toyota's go-to 6 cylinder engine from the 90's. It was put in Camrys and Lexus ES300's in the early 90's. Because they are old, they are cheap and easy to come by. However, they have an iron block so they are heavy and by today's standards they are poor performers. According to Wikipedia, the 3vzfe only put out about 185 hp (187 ps) and 189 ft-lbs (256 Nm) of torque. I think my 4agze engine put out about 180hp (182 ps)with 10lbs of boost. That's a lot more power than the 4age put out, but if you are going to go through all of the trouble to drop a V6 engine in a corolla, you might as well do it right. I can't comment too much on this engine. Due to weight, I did not give it much thought. I guess this is what it looks like. I pulled the image off of the net. 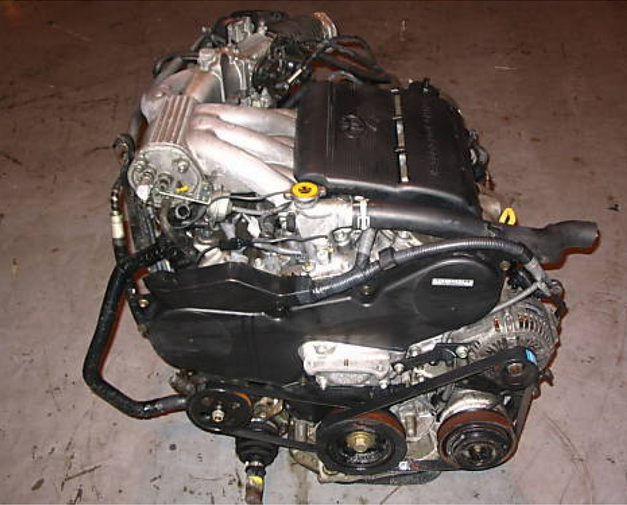 The 1mzfe engine, as I mentioned, is the one that comes in my wife's Solara. It looks a lot like and seems to have similar power numbers to the 3vzfe engine, but the primary difference is that it is an all alloy engine. For me this was the obvious choice because I felt it would be easier to consult my wife's car if I got into trouble and since I measured everything off of her engine, I wouldn't have to worry about another engine having different dimensions and messing me up.

This engine comes in a couple of different versions. The VVT version in Avalons and later cars, put out about 20 hp more than the 1999 version in my wife's car. The sacrifice is that the VVT version is an interference engine. As you will see later, it is easier to install the normally asperated version of this engine. So if you choose the 1mzfe engine, I would recommend getting the newer one. The extra horsepower would be worth it. Using the supercharger, as I'm doing, is a much harder install and will only net you about the same power as the VVT version of the engine anyway (with 4lbs of boost). Toyota claims that the supercharger at 4psi provides 250hp to this engine. I say no way! I ran some numbers and I doubt it will put out more than 220hp or 225hp. I'll be happy to share those numbers if you are interested. 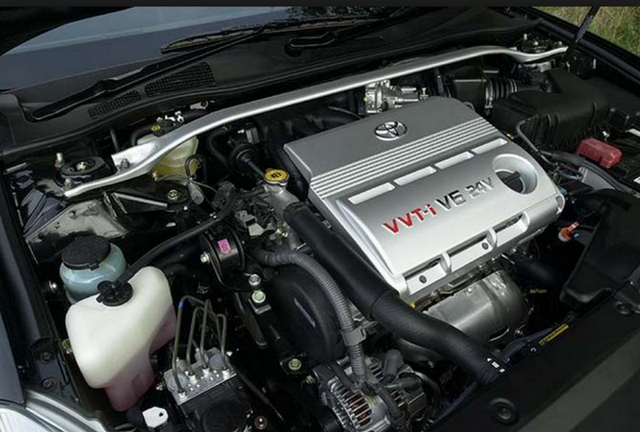 The 3mzfe engine is almost identical to the 1mzfe engine with a little more displacement. The differences are subtle. I think all of them have VVT, plastic intakes and throttle by wire. If you don't want a manual transmission, this is probably the engine of choice between these three motors. I'm pretty sure there would be no more work involved in physically mounting the engine, but you'd get a lot more horsepower and fuel economy. The final drive in the transmission that comes with this engine is very good for highway driving. The main reason I didn't choose this engine was that I wanted to use all of the stock wiring and the stock ECU. This means two things: throttle by wire, which most guys online agreed, sucked and no manual transmission option. If the engine never came with a manual transmission, then there is no ECU that accommodates that. So you have to do extra wiring to trick the ECU into thinking the automatic is still there. I didn't want to do any of that.

On solaraguy.com there are some guys who have made a hybrid 1mz/3mz engine, by putting the top of the 1mz on the bottom of the 3mz, essentially creating a 3.3 liter 1mzfe engine. That would be an option, but read on. 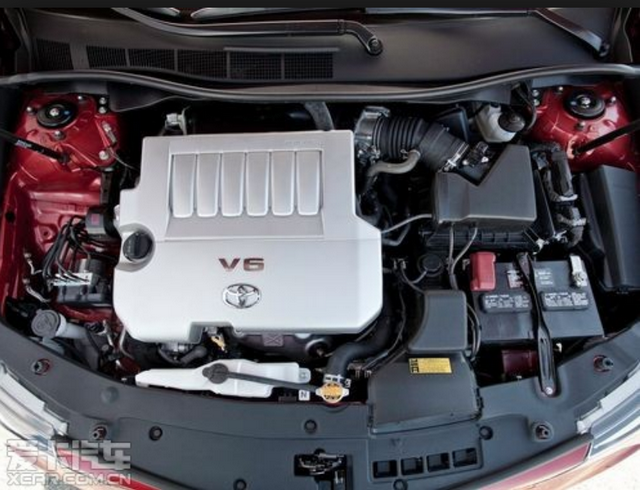 Today there is another option. The 2gr-fe is Toyota's 3.5 liter engine currently being used on everything, I think. It's in the Lexus IS350 and the Highlander SUV. If I were doing this swap today, I would do a lot of research to see if this engine would physically fit, because it has a boatload of power and great fuel economy. In fact, this is the engine I intend to put into my wife's Solara if the current engine ever fails.

According to wikipedia, this thing has a minimum of 266 hp and 245 ft-lbs of torque. I just read that it is a bit taller, which isn't good because that was the tightest dimension I dealt with on my swap. The cool thing about this engine is there is a 2gr-fse, which has direct injection. That would take more work to install, but could be worth the gains. 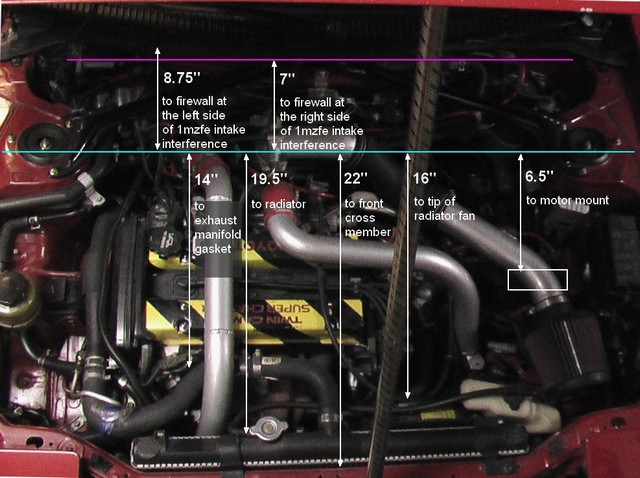 Here are some measurements I took when I was trying to figure out if the 1mzfe engine would fit in the Corolla. The blue line represents the axles, which is a fixed line along which the V6 would have to mount, in order to keep the shafts lined up with the hubs. The pink line represents the firewall at the point closest to the engine (I hope). The engine compartment is a complicated beast with lots of curves and things mounted on it, finding the positions of everything in 3 dimensions is very difficult with the engine still installed. If I remember, I will try to take measurements the next time I pull the engine out. 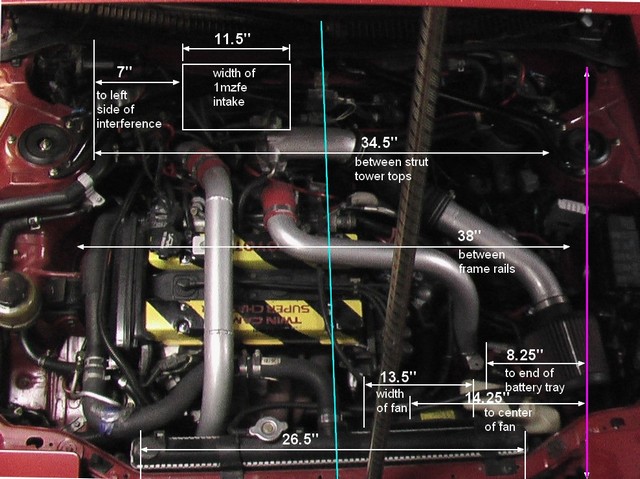 The pink line shows about where the lateral cross-member would come if the engine were installed in the Corolla. 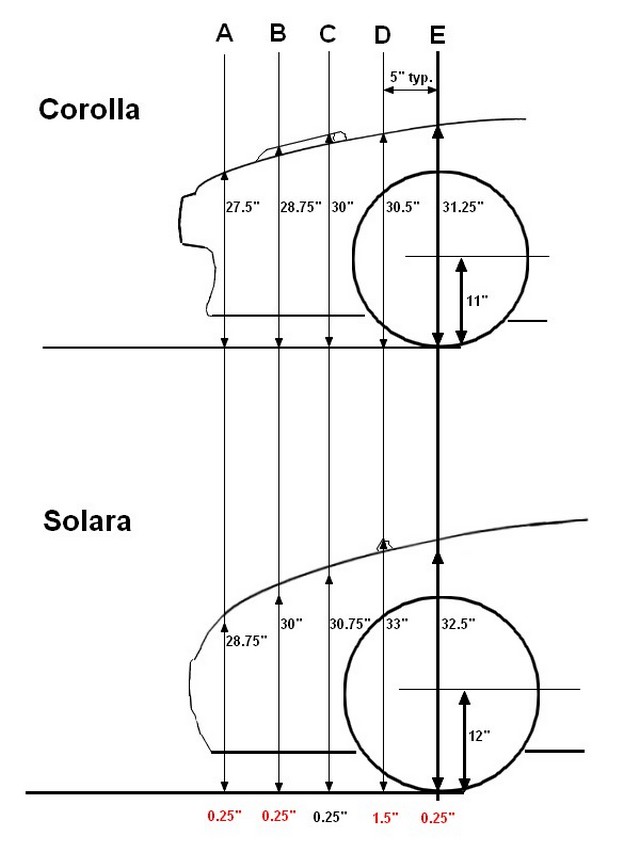 Here are some measurements I took from the side on both cars. The most critical interference problem is from the center of the wheel to the bottom of the hood. If you want the hood to close, and I do, you can't just move the engine down, because the axles will hit on the suspension. So when you are checking to see if an engine fits in your car, measure this distance carefully. As it is, I will have to cut away some of the support ribbing on the underside of the hood to make this work.

Of these measurements, only the interference along lines "D" and "E" were a problem. 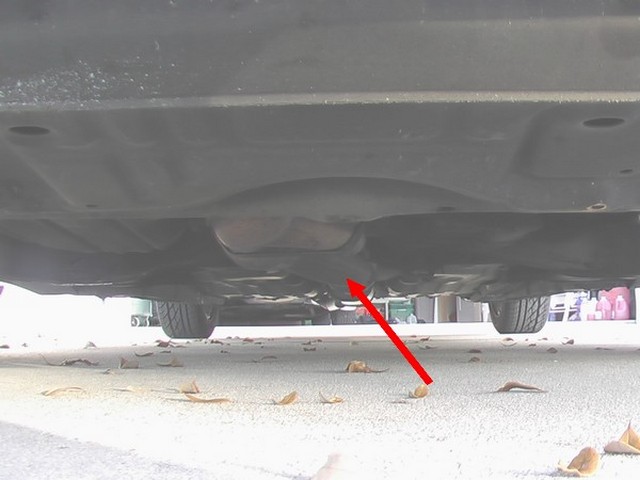 Here you can see that the exhaust passes under the Solara right down the middle of the car. In the Corolla there is a support member there. That support must be removed and the proper support provided for the engine. Also, and this is a big deal, a custom exhaust system will be needed. The stock manifold will not fit between the engine and the firewall. I found a much smaller V6 radiator that can fit on the driver's side of the engine compartment, which allows more room for the exhaust manifold on the forward bank of cylinders, but no matter how you divide it up, a custom exhaust will be needed. 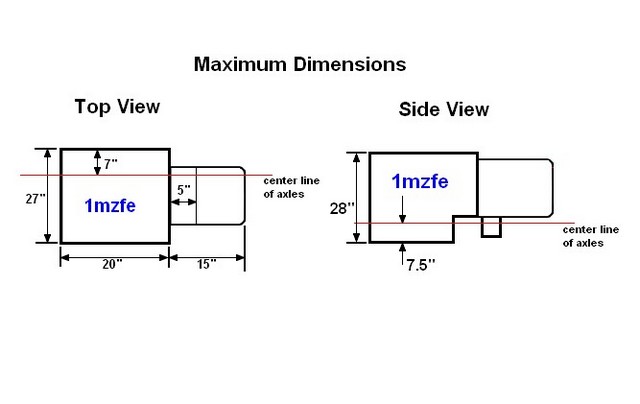 Here are some rough max dimensions I took from the 1mzfe in my wife's car. I no longer remember what the 5" measurement is. I think it's the bell housing. Hopefully this will help someone trying to do the swap.

The choice of transmission was a tough one for me. I did a bunch of calculations regarding gear ratios and determined to use the E153 transmission from the Solara. Two versions of this transmission exist. One that was used in front wheel drive cars and one that was used in the 90's version MR2 turbo. If I swap the portion on the transmission that accepts the cables, the MR2 transmission can be used. It will be a little bit quicker (acceleration), but will get worse gas mileage, especially on the highway, due to the differential ratio.

I decided to use the E153 transmission from the Solara, because it is built for a front wheel drive and because the gear ratios were already high due to the smaller tires on my car. The good news here is this transmission, being an E series transmission like the E58 that was used in the Corolla with the 4agze engine, will bolt right into the car and it located the engine for me. I highly recommend this option. You don't have to try to figure out how to position the engine when you use this transmission. It makes the job much easier.

If you want to do this swap you might as well forget using the original speedometer. The speedometer in the Corolla is cable driven. The speedo from the Solara gets pulses sent from a sender on the transmission.

I've included the table with the gear ratios below because it's really cool. Enjoy!

These are overall gear ratios (i.e. gear x differential). One thing that I have learned is that you cannot use the E58 or E51 transmission without changing the bell housing, because the starter is located toward the back and right of the join line between the engine and transmission. This would cause the starter to occupy the same space as the engine. I presume the bell housing of the E153 would fit on either the E58 or the E51, but I have not verfied this.

My solution for all of these issues was to purchase a donor car and transplant nearly all of it's systems into my car so that I would have essentially a Corolla shell with a Solara everything else. And that's what I did. . . .